While most United States Businesses are in pandemic mode bracing themselves for what could be another great depression or atleast recession the Government spending is on the rise.

With the coronavirus pandemic exacerbating a slowdown in the global economy, governments around the world may have no choice but to increase spending to support businesses and households well into the next year, according to an economist from S&P Global Ratings.
Now more than ever is the time to be looking at Government Contracting especially if you are a small business.

GSA SCHEDULE Contracts also referred to MAS Contracts are the entry level into the Government Sector and will allow small business a consistent stream of revenue.

BKM Management Consulting has the knowledge to help your business gain a GSA Schedule Contract under the MAS Schedules.

Shame on small businesses for not learning more about Government Contracting in these uncertain economic times.

The federal government’s long-running progress on improving employee engagement at agencies and departments has essentially stalled, concluded officials at the nonprofit Partnership for Public Service in its annual “Best Places to Work in the Federal Government” report released Wednesday. The findings were prepared in collaboration with the Boston Consulting Group.

Although the Office of Personnel Management announced in October that engagement across government increased slightly in 2018, according to the results of its Federal Employee Viewpoint Survey, the Partnership found that at a majority of agencies, employee engagement actually fell.

Using its own weighted average to FEVS questions, the Partnership found that engagement declined at 59 percent of federal agencies and departments, compared to only 40 percent of agencies where scores improved. The remaining agencies saw no change. Last year, more than 70 percent of agencies saw gains in their engagement scores over 2016. BKM Management Consulting was encouraged to see that a Government Agency was ranked as one of the best places to work.  www.bkmmgmtconsulting.com

On the question of agency leadership alone, only 46 percent of agencies saw improvement this year, compared to 76 percent in 2017.

Among large agencies, the National Aeronautics and Space Administration led the pack for the seventh straight year, increasing 0.3 points from 80.9 last year to 81.2 in 2018. The Health and  Human Services Department came in second, improving 0.5 points to 70.9 this year. And the Commerce Department saw a 1.1 point increase, from 69.2 in 2017 to 70.3 this year.

But the Agriculture Department saw a 6.9 point decrease in engagement, according to the Partnership’s rankings, falling to 59 this year, ahead of only the Homeland Security Department among large agencies in overall score. The State Department’s engagement score dropped 3.3 points, from 64 in 2017 to 60.7 this year.

Among mid-size agencies, the Federal Trade Commission led the pack, improving 2.6 points to a 2018 score of 84. The Small Business Administration was tied with the FTC for best improvement, reaching an overall engagement score of 62. Coming in second behind the FTC was the Federal Energy Regulatory Commission, which received a 83.9 engagement score, followed by the Securities and Exchange Commission’s 82.1.

The Veterans Affairs Department was not included in the rankings, as a result of its shift this year from FEVS to an internal employee survey. The department will return to the rankings next year, but it, along with any other agency that does not participate in FEVS, will not be included in governmentwide engagement scores. 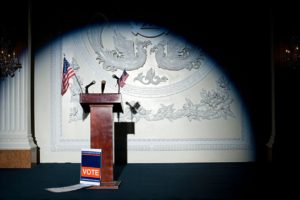